The common marmoset is a New World monkey.

A marmoset group can contain as many as 15 members, but a more typical number is nine.  A marmoset family usually contains one breeding female, a breeding male, their offspring and their adult relatives, be it their parents or siblings. The females in a group tend to be closely related and males less so. Males do not mate with breeding females that they are related to. Family groups will break apart and separate into new groups when a breeding male dies. Within the family groups, the breeding individuals tend to be more dominant.

When conditions are right for them to breed, adult females breed consistently for the rest of their lives. Females gestation period lasts for five months (+- 144 to 155 days), and females are ready to breed again around ten days after giving birth. Their inter-birth intervals last five months and they give birth twice a year. Marmosets commonly give birth to two or three non-identical twins. Because of this, female have high demands during pregnancy and lactation, and need help from the other members of the family. Infant marmosets have very strong cling reflexes and will not voluntarily leave their carrier’s back for the first two weeks. After that, they become very active and explore their surroundings.

The common marmoset’s claw-like nails reflect their unique diet which is primarily made of plant exudates and insects. Common marmosets feed on gum, sap, latex, and resin. A marmoset may keep visiting a previously made tree wound or even use those made by other animals. In addition to exudates, insects also prove an important food source for marmosets, making 24-30% of their foraging time. The small size of the marmoset allows them to subsist on insects. Marmosets will also eat fruits, seeds, flowers, fungi, nectar, snails, lizards, tree frogs, bird eggs, nestlings, and infant mammals. Marmosets are omnivorous.

Names of some other species of marmosets:

Common marmosets employ a number of vocal and visual communications. To signal alarm, aggression, and submission, marmosets use the "partial open mouth stare," "frown," and "slit-stare", respectively. To display fear or submission, marmosets flatten their ear-tufts close to their heads. Marmosets have two alarm calls: a series of short ascending calls called "staccatos", and brief descending calls given either alone or in a series. These are called "tsiks". Marmoset alarm calls tend to be brief and high-pitched. Marmosets monitor and locate group members with generic calls called "trills". They have a lower pitch and cyclic frequency fluctuations that give them a distinctive vibrato sound. Marmosets also employ "phees" which are generic calls made of a series of one to five notes that last about two seconds each and play a role in long-range communication, mate attraction, group cohesion, territorial defense, and finding of lost group members. Marmosets will mark objects with secretions from specialized scent glands on their chests and around their anus and genitals. These are meant to convey social status, and advertise reproductive status.

About 16 months to 2 years old 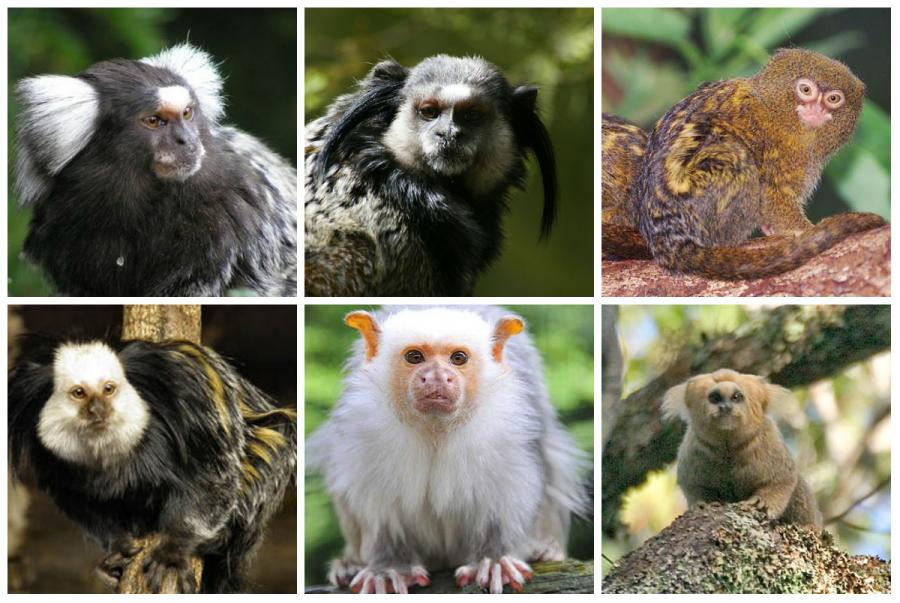 You are not allowed to keep these primates without a permit.

A typical forging group consists of a single adult male, a pregnant female, & her young from a previous litter.

After a gestation period of 110–133 days, young galagos are born with half-closed eyes and are initially unable to move about independently. After a few days (6–8 days), the mother carries the infant in her mouth, and places it on branches while feeding

During the rainy season, bush babies eat mainly insects such as caterpillars & dung beetles, which they catch by pouncing on them. They are quick enough to catch mice & lizards. In addition, they raid birds' nests for eggs. Bush babies eat flowers, fruits, pollen, nectar, & honey from wild bees as well. In the dry season, their diet changes as food becomes scarce. They rely on the resin of acacia & albizzia trees, & they only survive in areas where these trees grow.

Warm places of Asia and Africa

Names of some other species of Bush babies:

They communicate both by calling to each other, and by marking their paths with urine. By following the scent of urine they can land on exactly the same branch everytime. At the end of the night, group members use a special rallying call and gather to sleep in a nest made of leaves, a group of branches, or a hole in a tree.

Reports from veterinary and zoological sources indicate captive lifetimes of 12 to 16.5 years 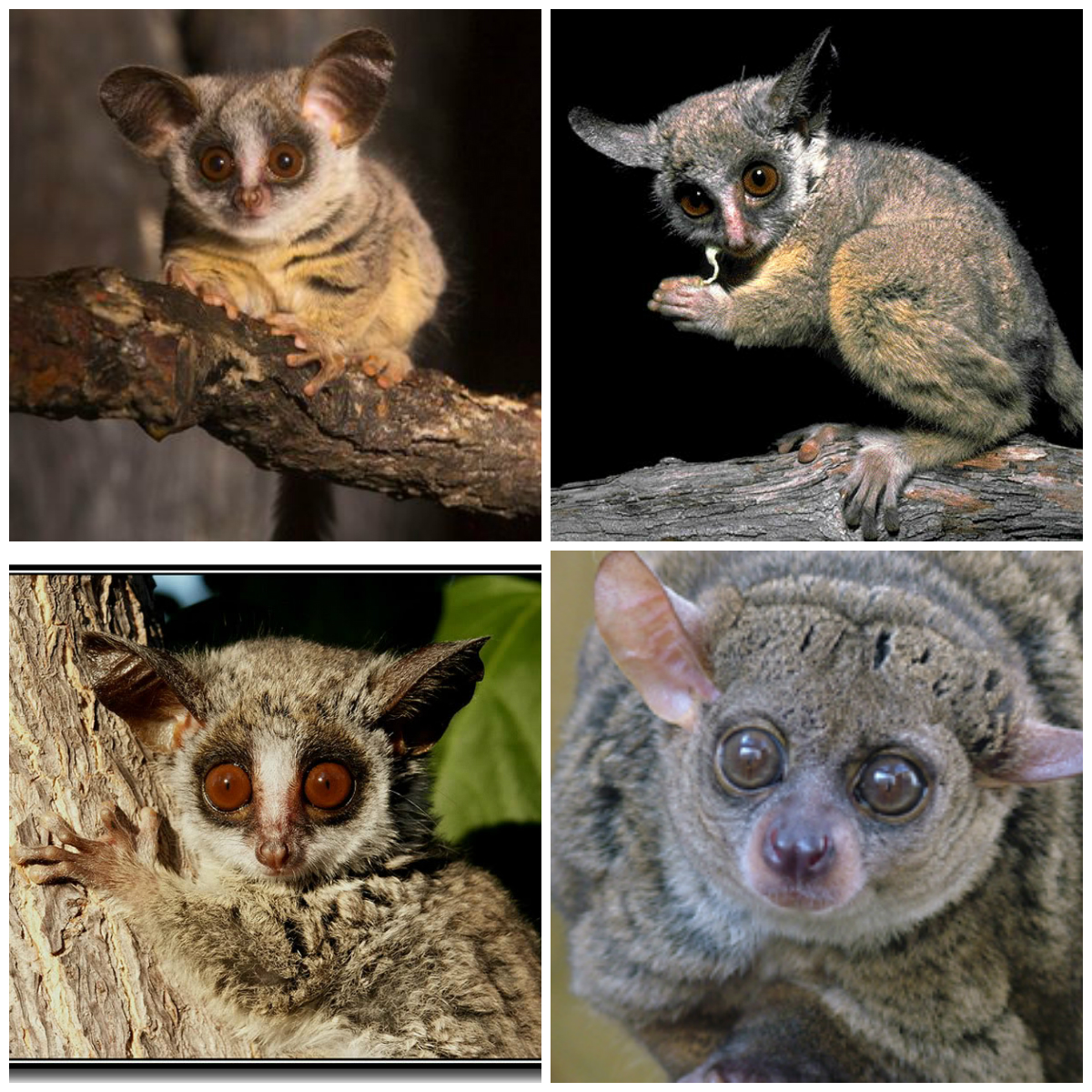 Different tamarin species vary considerably in appearance, ranging from nearly all black through mixtures of black, brown and white. Mustache-like facial hairs are typical for many species. Their body size ranges from 13 to 30 cm (plus a 25 to 44 cm long tail) and they weigh from 220 to 900 grams.

Tamarins live together in groups of up to 40 members consisting of one or more families. More frequently, though, groups are composed of just three to nine members.

Gestation is typically 140 days, and births are normally twins. The father primarily cares for the young, bringing them to their mother to nurse. After approximately one month the young begin to eat solid food, although they aren't fully weaned for another two to three months.

Tamarins are omnivores, eating fruits and other plant parts as well as spiders, insects, small vertebrates and bird eggs.

Names of some other species of tamarins:

The cottontop tamarin vocalizes with birdlike whistles, soft chirping sounds, high-pitched trilling, and staccato calls. Researchers say its repertoire of 38 distinct sounds is unusually sophisticated, conforming to grammatical rules and able to express curiosity, fear, dismay, playfulness, warnings, joy, and calls to young. It has loud territorial songs as well as songs when it is excited. It moves its tongue across the lips. This may be a recognition signal, or could be used to communicate anger or curiosity. A "threat face" consists of lowering the forehead until it forms a bulge which almost covers the eyes; the lips are pushed forward and the head and neck crests are erected. This apparently is sufficient since no other body language is used.

Puberty is about 29 months in cotton-top females, it can be accelerated by exposure to a novel male to as early as 10 months

Is about 10 months to just under two and a half years old.

In captivity, tamarins can live for up to 18 years. 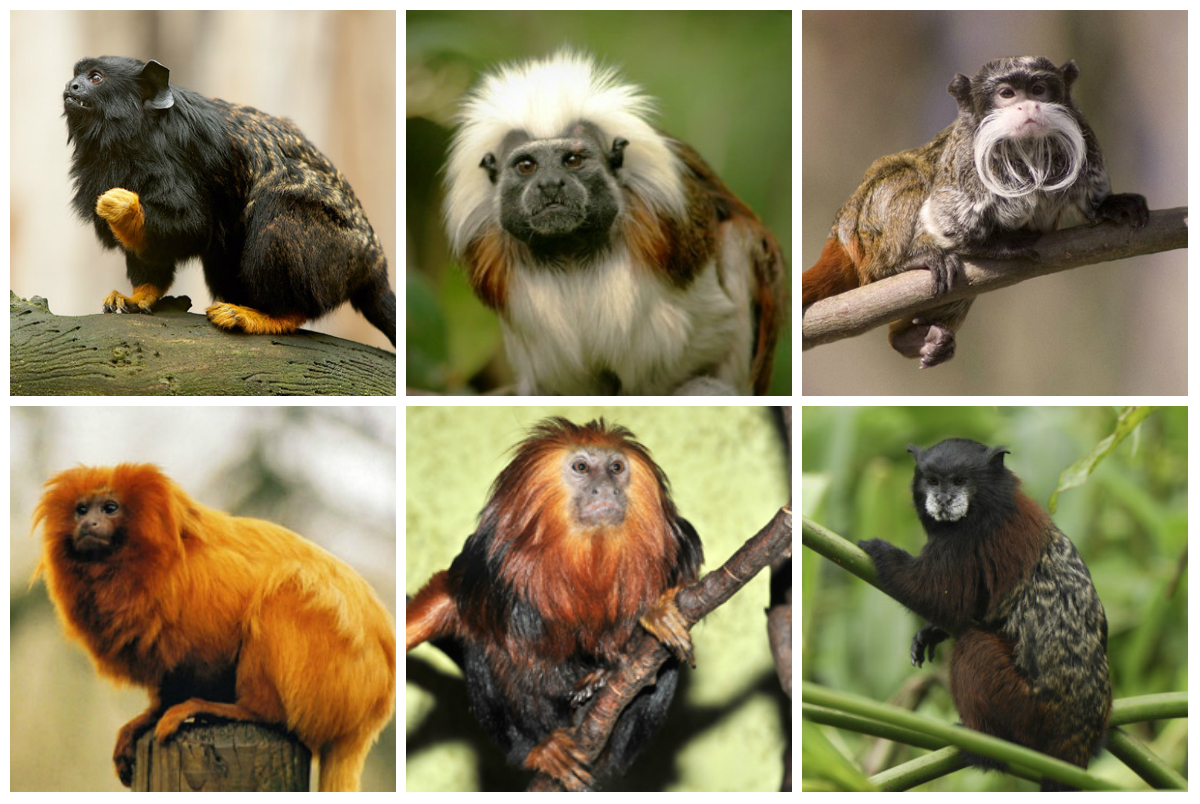 They live together in multi-male/multi-female groups with up to 500 members. These large groups can, however occasionally break into smaller troops.

Females give birth to young during the rainy season, after a 150- to 170-day gestation.

Names of some other species of Squirrel monkeys:

They have a number of vocal calls, including warning sounds to protect themselves from large falcons, which are a natural threat to them. Their small body size also makes them susceptible to predators such as snakes and felids. For marking territory, squirrel monkeys rub their tail and their skin with their own urine.

Males mature at the age of 2 - 3 years, and females come in puberty by 2 years of age. 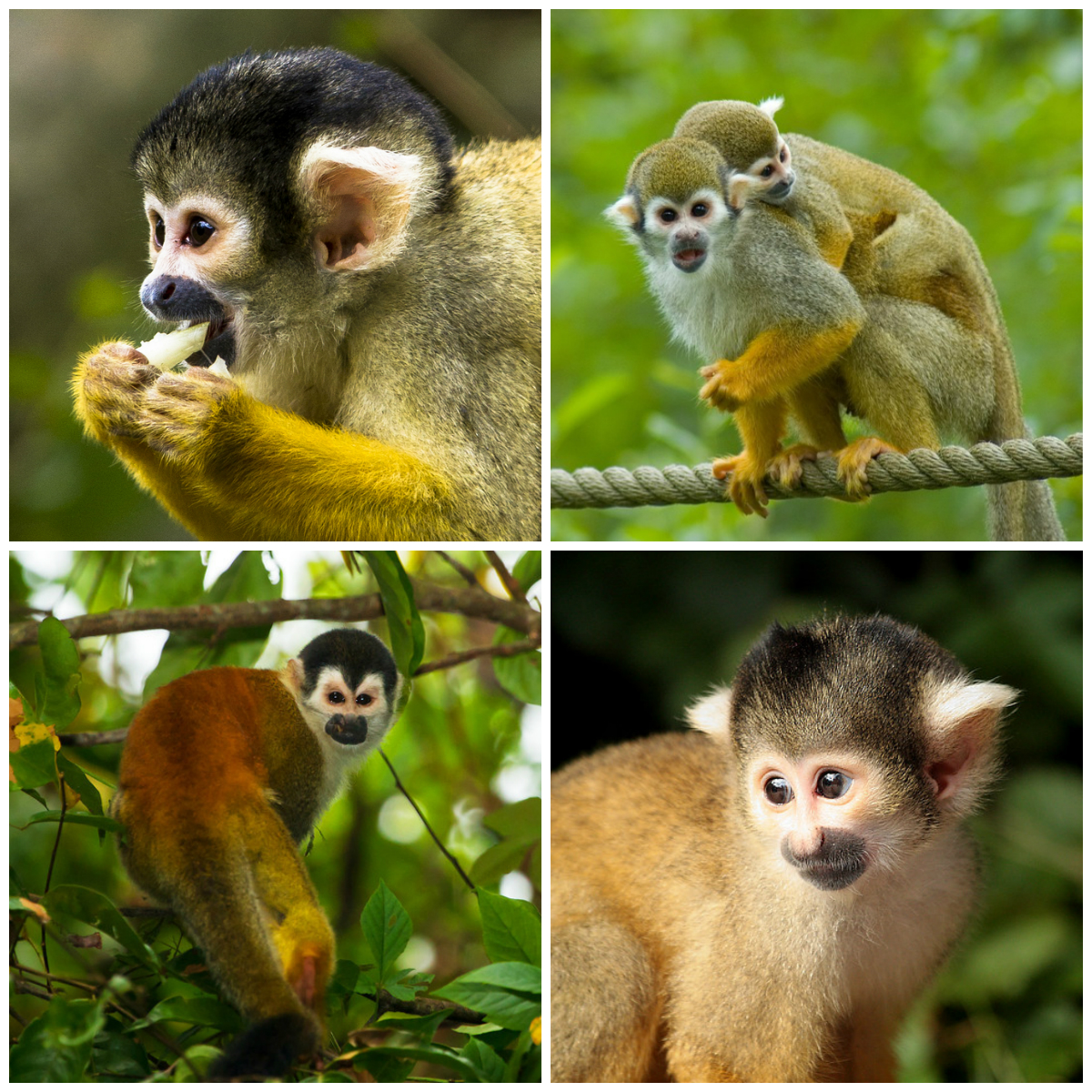 Capuchins live in groups of 10 to 40 members. These groups consist of related females and their offspring, as well as several males. Usually groups are dominated by a single male, who has primary rights to mate with the females of the group

Females bear young every two years following a 160 to 180 day gestation. The young cling to their mother's chest until they are larger, when they move to her back. Adult male capuchins rarely take part in caring for the young.

The diet of the capuchins is more varied than other monkeys in the family Cebidae. They are omnivores, eating not only fruits, nuts, seeds, and buds, but also insects, spiders, birds' eggs, and small vertebrates. Capuchins living near water will also eat crabs and shellfish by cracking their shells with stones

Names of some other species of Capuchin monkeys:

Mutual grooming as well as vocalization serves as communication and stabilization of group dynamics. These primates are territorial animals, distinctly marking a central area of their territory with urine and defending it against intruders, though outer areas may overlap.

Two to two and a half years old. 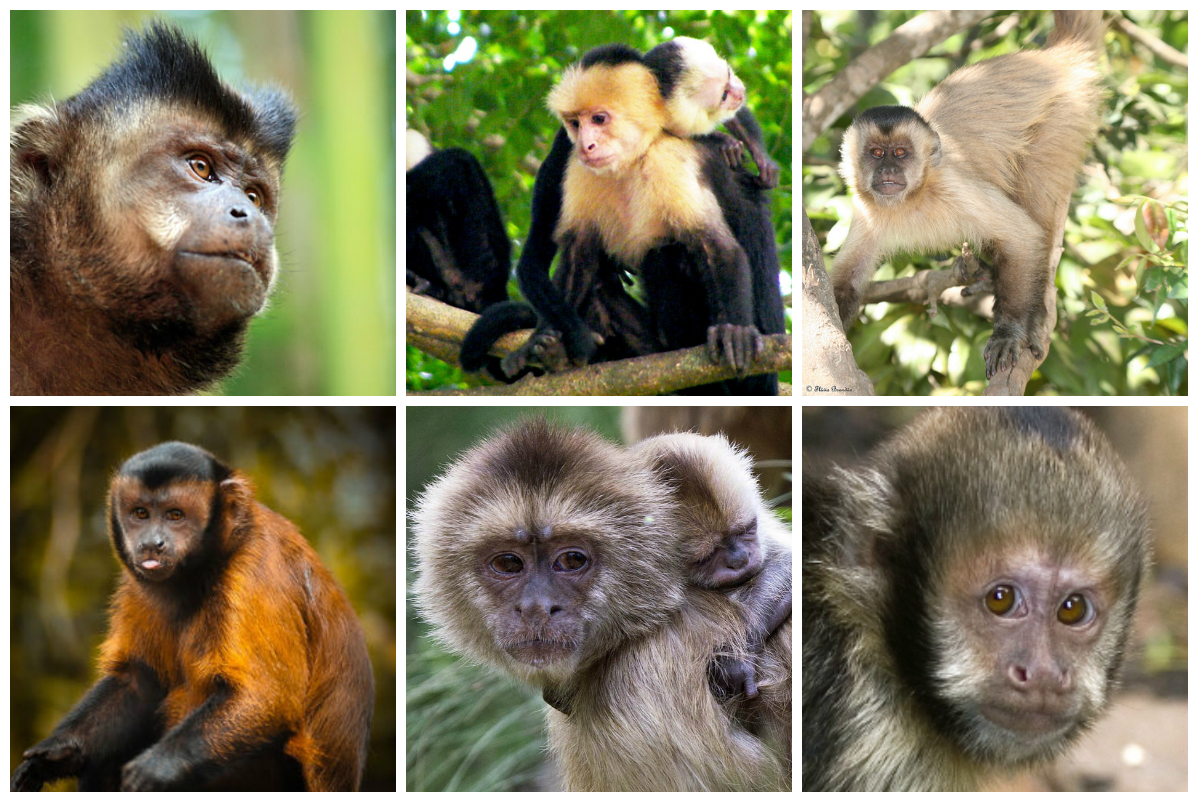